Day 5 of the ketogenic diet

What a day. What a night. Yesterday started okay. But it went from bad to worse. Kalle showed lots of epileptic activity, didn't want to sleep during the day.

The evening and the night were even worse. Jan stayed with Kalle while I went home. Kalle cried and wailed. His sleeping meds didn't help to fall asleep. At 1am I drove back to the hospital 'cause I couldn't sleep anyway. My baby is crying and feeling miserable 20 minutes away...how am I supposed to sleep at home?? When I got to the hospital Kalle just fell asleep. I stayed, Jan went home. I woke up at 3 and noticed lots of epileptic movements. It scared the hell out of me...Kalle never showed any epilepsy while he's asleep. At 6 he wanted his bottle. He slept another hour, then woke up again. This night was too short!
I guess it's all because of the new nutrition that completely turns around his metabolism. His body is burning fat instead of carbohydrates more and more. He's slowly getting 'into ketosis'. The doctors warned us: Kalle might feel uncomfortable, nauseous, weird for a couple of days. He might get more seizures. All because of the 'metabolism-switch'. Let's hope it'll be over soon....
We're proud Kalle actually drinks his new nutrition...it's 90% fat! That's kind of like drinking butter.
This morning Kalle had an EEG. He doesn't like the electrodes glued to his head with a smushy paste (makes his hair even curlier). But he did a good job, barely cried, drank is bottle. He showed a couple of little seizures, which is good. At least they can now analyze what they see on the EEG in connection to what Kalle is doing.
To get rid of the smushy paste and the red pen stripes on his head (which mark the spots where the electrodes are glued) we're going to take a shower together :-) Can't believe this hospital doesn't have a bath tub or even a small warm swimming pool.
To be continued.... Sonja 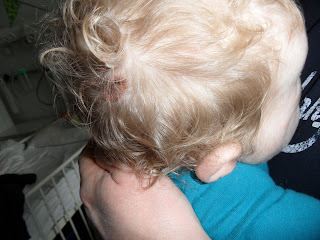 glue & red pen stripes after the EEG
Jan still has time to impress the nurses by playing 'Sinterklaas'-songs.... 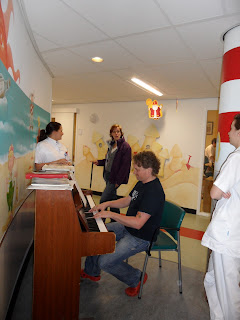