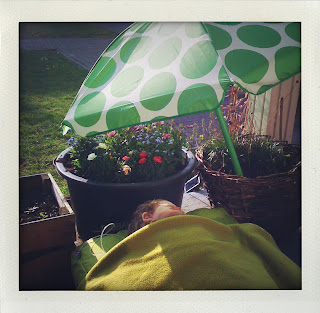 Kalle had a better day today. Maybe he felt that we sent an email to the neurologist yesterday.... (who didn't answer yet, by the way).

Kalle had less seizures, he was very alert every now and then, he didn't even need his nasal feeding tube. After so many bad days this was a good one. Or at least a better one. 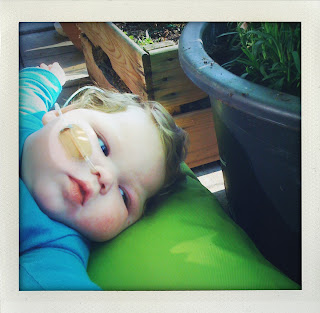 We really learn to appreciate the small things, like sitting on our front porch in the sunshine.

Kalle is not doing okay. His epilepsy is way too present, he gets irritated very easlily. Sometimes he gets seizures when he coughs or sneezes, when he hears a sound, when somebody approaches him. And sometimes they just come out of nowhere.
Yesterday he went to the medical daycare center, like (almost) every friday. He did okay when he was there, he even drank 2 bottles all by himself, didn't need his nasal feeding tube. But as soon as we got in the car the siezures started. Heavy, fast breathing, his eyes moving weird, tension, crying, the whole thing. It felt like the day at the daycare had been too much for him. Too many kids, too many noises, just too much going on, not enough rest. We noticed that before. We needed two hours to calm him down at least a little bit. So is daycare a blessing or a curse? Yes, Kalle needs to get used to other kids. It's good for Jan and me to have some time without Kalle (people say). But if this is the price we have to pay....
Kalle woke up twice last night, not happy. This morning the nightmare continued. Again: lots of seizures. We gave him some laxative because we know that not pooping means much more irritation. Without any result so far.
We don't know what to do. Why do those things always happen when it's weekend, when Kalle's doctor is not working and calling the hospital is not really an option?? Yes, we could talk to an assistant neurologist, but those people usually never met Kalle. They don't know his medical history. So we'll just hope Kalle gets through the weekend without any major incidents. And we'll call his doctor on monday.
Gepost door Kalle Elvis Markowski op 12:21 0 reacties

I wish I could say 'no news, good news'. Unfortunately that's not the case. It's just that there is not much to say. 'Cause nothing really changed.

We started weaning off the sodium valproate ('Depakine') 2,5 weeks ago. We think it never helped controling the epilepsy. When Kalle got this med for the first time (may / june 2010) we had never seen any seizure before, even though his EEG showed some epileptic activity. Shortly after the start of Depakine the first muscle jerks started. I still think that's kind of weird.

Weaning off an anti-epileptic drug can have the same effect as weaning off heroin. The body gets used to it. And even though the Depakine never might have helped controling the seizures, you still might see strong signs of withdrawal. Like more seizures, more crying, more restlessness, more irritablitily. That's why it's important to take it slow. Small steps. We have to be patient. Yes, Kalle sometimes showed more epilepsy during the last couple of weeks. At least, some days. He cried more, he was more irritated. But it's too early to state that the Depakine did in fact work after all. Because all this might be 'just' a sign of withdrawal. We hate it. We hate that we never know why things are happening. It's not looking for the usual solutions like: feed, change diaper, hold tight, put to bed,... It's a puzzle that might never be solved, no matter how hard we try, no matter how hard the doctors try. How do we have to deal with that?
Gepost door Kalle Elvis Markowski op 10:46 1 reacties

Had an appointment in the hospital this (early...) morning. Kalle's growth hormone level had been tested twice in the last couple of months and both times it was too low. This hormone deficit might explain why Kalle is still pretty short for his age and why he didn't grow at all since october. On the other hand, this deficit would be caused by a malfunction of the hypophysis, a very small part of the brain. Usually this malfunction would also cause other problems, for example a malfunction of the thyroid. But that's not the case.

So...today they wanted to run another test, a bigger one. Kalle wasn't allowed to eat after 4 am. At 9 am we had the appointment. What was supposed to happen: Kalle would get Clonidine, some kind of drug that stimulates the production of the growth hormone. During the 2,5 hours after taking the Clonidie they would take blood from Kalle's finger every 30 minutes (= six times).
Usually they don't take the blood from the finger. They prefer inserting an intravenous line. But that's almost impossible 'cause Kalle's veins like to hide from the doctors :-). Smart veins... That's why they agreed to prick his finger(s) instead of torturing him for a long time with that intravenus line. What they didn't tell us: they needed a LOT of blood from his small fingers. Six times. If we would have known we would have told them that this is also a problem. Cause it was before. We thought it would be just the usual fingerprick that we know from testing Kalle's bloodsugar and ketone levels. But no... So guess what: that didn't work either. There was just not enough blood.
They called an anesthesiologist (good at finding veins). She tried to insert an intravenous line after all. Twice. Didn't work. Kalle wasn't allowed to eat anything during the whole procedure.
After 2,5 hours of waiting and trying to get enough blood we went home. Without any result. Just a nice visit to the hospital.

Kalle's pediatrician will talk to the endocrinologist to figure out if there are any alternatives. And if the test is so important that it really has to happen now, a.s.a.p. If so, they might need to insert the intravenous line under narcosis. Not exactly something to look forward to. Narcosis and epilepsy doesn't sound like a good combination. Narcosis always is a risk anyway. Even for healthy people.
So that was the first part of this tuesday. Oh, did I mention that our car broke down in front of the hospital? (It's fixed already, thanks to our car repair man hero who works just half a kilometer away from the hospital) 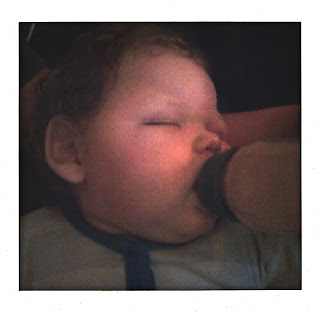 At least Kalle did a good job. He slept a lot, he was relaxed (except for the needle-moments). Even the epilepsy monster was asleep almost the whole time.

Kalle and my nose

Terrible start of the week on monday. Jan had to stay home instead of going to work. Kalle cried hysterically for hours, had lots of seizures...and I couldn't handle it.
The last couple of days were okay-ish. Some parts of a day with lots of epileptic activity, others with hours of sleep or a pretty alert Kalle.
Two days ago Kalle looked at me while he was 'sitting' on Jan's lap. His left hand grabbed my nose and squeezed it really hard. I loved it. Those are the small things we carry like a present for a long time.
Went to Danny, the osteopath, today. He hadn't seen Kalle for two months. Danny was positive about Kalle's muscle tension and his alertness. Unfortunately he also noticed that he had never felt such strong seizures :-(  I guess that's the controversy of this moment....
Gepost door Kalle Elvis Markowski op 20:41 0 reacties

Yesterday was a terrible day with lots and lots of seizures. Today was a better day, with less seizures. Kalle was more relaxed and so were we.
It's frustrating that this is not a puzzle we can solve. Usually if I really want to understand why something is going on I do some research until I find the answer. But this is an other league. Epilepsy is a monster. Unpredicatable and mean. Yesterday the monster was angry. Today it was present, but it was in a relatively good mood. We try to find out how we can keep it in its cage. We can't accept it's stronger than we are, stronger than the doctors are. So we just go on. We'll do everything we can to conquer it.
Gepost door Kalle Elvis Markowski op 00:45 2 reacties

From bad to worse

The last two days were a nightmare. Kalle's epilepsy is getting out of hand. Today he had so many small seizures that counting them was impossible. He's sleeping now, after two hours of constant crying, fear in his eyes and lots and lots of muscle jerks: arms, head, sometimes legs. Calling the hospital in the evening isn't a good option because Kalle's neurologist only works during the day. There is always another (assistant) neurologist present, but most of the times it's someone who doesn't know Kalle, his medical history. So we'll wait until the morning. What the neurologist will suggest....we don't know. This situation is unacceptable. But trying another med...We'll see.
It's sad, so sad.
Gepost door Kalle Elvis Markowski op 22:11 1 reacties

Not a surprise, but still disappointing

So yesterday's EEG was bad. Much worse than the one four weeks ago. And just as bad or almost as bad as the one Kalle had at the beginning of diet, in november. What a disappointment, what a setback. Another one. It's not a surprise because we saw so much more seizures during the last couple of weeks. But we hoped that at least the EEG would be as 'good' as the last one.

We also talked to the keto-team today: the two dietitians and the epilepsy nurse. What might be the reason the diet worked in the beginning and kind of stopped working after 2-3 months?

- Sometimes it just happens.
- Kalle's ketosis is realtively high, maybe slightly too high. That might cause more seizures. His nutrition needs some adjustment.
- One of Kalle's meds (Depakine, the dutch brand name of sodium valproate) might have a bad influence on the diet. There is no official proof for that, except lots of stories of keto-kid parents: They experienced that the diet worked during the first weeks, but then the seizures came back. Lowering (instead of increasing) the doses of sodium valproate helped making the diet work again. But it's not clinically proven, so we hope to convince the neurologist that it might be worth a try. The alternatives sound worse: another med, increase the doses....no thanks. 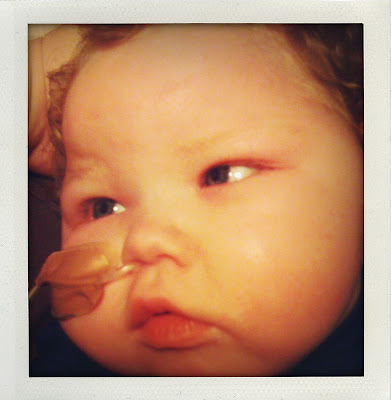 At least we decided to continue the diet for maybe another three months.