Okay...so now we have two kids. Big brother Kalle and little brother Liko. We are in the middle of becoming multitasking super parents. Paying bills while feeding, cooking with one hand, holding two kids in one arm while checking our emails with the other... No it's not easy. At all. At least Kalle sleeps pretty well during the (short) night so we don't have two kids asking for attention in the wee hours....
Taking care of Liko automatically means we don't have that much time and attention for Kalle as we used to have. That's difficult. But on the other hand: he seems to be 'fine', he doesn't cry more, he doesn't have more seizures. So I guess it's more difficult for us than it is for Kalle.

The huge amount of phlegm still is his biggest problem. The doctor said we shouldn't underestimate the influence of the teeth breaking through. There are 7 now, including 4 molars. Within just a bit more than 2 months. Getting teeth means drooling 24/7. Maybe Kalle('s body) just doesn't know how to deal with this.

No further news... still waiting for the results of the EEG-reevaluation, in order to analyze the possibility of epilepsy surgery. If it is true that lots of seizures start at one spot in Kalle's head it might be an option. But somehow we don't believe that is the case. The meningitis damaged his brain in so many different places. It would be weird to find one major source of the epilepsy.

Kalle had a weird week. He slept a lot, he didn't drink well, his face looked pale and the content of his diapers was...well...dfferent. We thought he might have some kind of stomach flu and that the arrival of little brother Liko might be a huge adjustment for Kalle.
We can never be sure what's going on with Kalle. It might be one thing or the other or a combination of things or something completely different. What definitly didn't help: there a two new teeth. They appeared without any warning. Today they were just there. No, of course not the last front tooth. Two huge molars, on the left side. One in the upper, one in the lower jaw. Surprise! 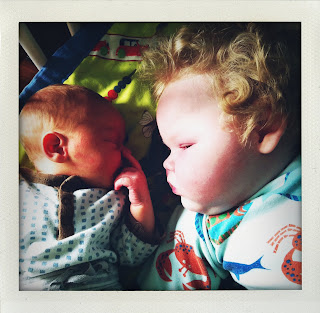