Result EEG & an unnecessary visit to the epilepsy center...

A couple of weeks ago Kalle had his 24 hour EEG with video monitoring. Today we went back to the epilepsy center in order to talk about the result and possible next steps. After a 1:45 drive and some waiting we learned that the result still wasn't available. No official result in the computer yet. Great. The neurologist called the guys who analyze the EEG's so we would at least hear a small summary. Here's what he told us:

- Everything we suspected to be epilepstic activity actually is epileptic activity. No surprise to us.
- Most seizures seem to come from one place in Kalle's brain, which is remarkable because the brain damage occured in lots of different places. The 'good news': If this is really true Kalle might be a candidate for epilepsy surgery. They have to check earlier EEG's and brain scans and then discuss Kalle's case in some epilepsy surgery working group. That result was a surprise to us because it's so different from earlier EEG's. But: this was the first long EEG with video monitoring, so the results are much more reliable.

Just after we got home we got an email from the neurologist, with the official result... Additional information:

- Kalle has epilepsy 40-80% of the day
- He has slightly less activity at night, but his sleep isn't very 'effective'. Almost no difference between the differents stages of sleep.
- There's more activity on the right side of his brain, which also surprises us because there's more damage on the left side.
- Some activity matches the symptoms of West Syndrome, others don't. Possible conclusion: the epilepsy is changing (...so...?).

So now we just have to wait. That's okay. Kalle had some really good days during the last couple of weeks. Some really bad days, too. But the good days were good enough to accept the current situation. We won't think about possible surgery until the doctors analyzed the other EEG's and the scans. Just thinking about it for one second scares the hell out of us.

After spending hours in the car for nothing Kalle didn't stop crying and having short seizures for hours. I think he felt as grumpy as we did.... 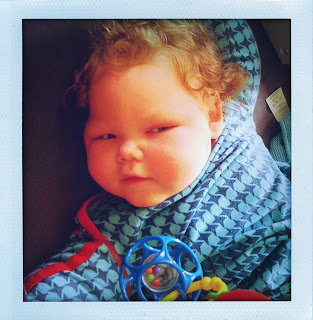 Kalle has a pretty good day today...he slept well (not long enough, but hey....) and he played with his baby gym!

We're working on a short video compilation... here's what we have so far...
Gepost door Kalle Elvis Markowski op 13:54 1 reacties 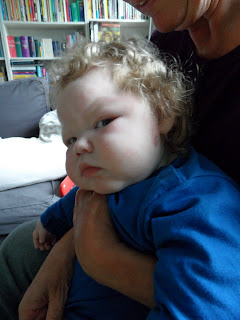 Maybe I shouldn't tell that Kalle had two good days. 'Cause every time we have some good news something bad happens the next day. But maybe this time will be different :-)

Kalle has been pretty relaxed and alert the last week, especially the last two days. Just a couple of seizures. Greet, Kalle's physiotherapist, could actually do some exercises with him. Usually Kalle is not okay enough to do so.

The last week has been weird. Kalle definately has been more alert than the day we went to the epilepsy center. The seizures come and go. Hours with almost nothing, hours with way too many of them. Why? Who can tell. Maybe he's finally getting his first teeth? Maybe it's because he had a cold? We just guess.
We have an appointment at the epilepsy center on may 31 to discuss the result of Kalle's EEG. And - much more important - to discuss what will happen next. To think about the next AED almost makes me feel sick. We're afraid that it will destroy the very fragile balance Kalle has. On the other hand....what if the next drug actually does help...?
Gepost door Kalle Elvis Markowski op 23:48 0 reacties

We're back home, after a day and a night at the epilepsy center. We're exhausted, tired. Carrying Kalle around with wires on his head and a small box attached to him wasn't exactly fun. Jan had to work in the afternoon and in the evening. He got back to the center after midnight.
We had a 'push button' we had to use every time we notice a seizure. This morning we heard that we pushed the button 50 times during 24 hours. That's terrible and confronting. Yesterday was one of those days the epilepsy monster was ugly and strong.
This morning, when we got home, we put Kalle in his bath tub and clean his head in order to remove the glue they used to attach the electrodes. At least we think he feels more comfortable today. Does he feel we're back home?
The doctor will now analyze the EEG. This may take a while, maybe weeks.
We're hoping for better days, with more alertness and less seizures. Can please somebody talk to that stupid monster??
Gepost door Kalle Elvis Markowski op 23:14 0 reacties

At the epilepsy center 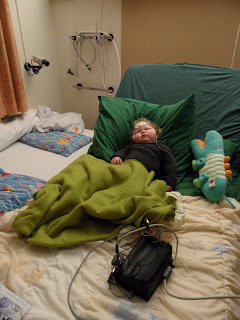 First day at the epilepsy center....lots of wires on Kalle's head, but he's doing okay. He showed some of his typical seizures, which is good in this case 'cause that's why were here. We have to carry around this black case where the 20+ wires are plugged into. 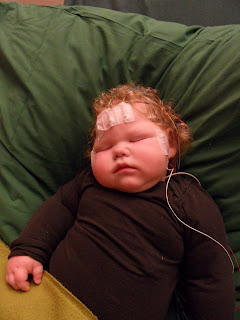 Camera's are following us everywhere (except the bathroom :-) ). We have a special button we have to push every time we see something we associate with epilepsy. It sets a mark on the EEG and makes it easier for the people who'll analyze the EEG.
Gepost door Kalle Elvis Markowski op 22:25 1 reacties