So we started weaning off the Vigabatrin (Sabril). From 2x 600mg / day we're now at 2x 450. We see a little more seizures, but we are not sure if they are a result of the weaning. We also started giving Kalle a small dose of antibiotics every day, to prevent him from getting bacterial infections on top of all the viral infections he gets anyway. Lots of kids with a weakened immunsystem take antibiotics during the cold months. We hate to give him another drug, but it would be much worse if he would get pneumonia. Other parents of kids with similar problems as Kalle noticed that the antibiotics have some effect the epilepsy: some noticed more, others less seizures. Great. So we don't know what's going on. Kalle also had a pretty bad cold. Sneezing, coughing... The last two times he had colds we saw more seizures after the cold was gone. Don't ask why. So we keep on guessing where the increase of seizures comes from.

During the last couple of months Kalle's urine was tested three times. It's important for all kids on the ketogenic diet because they get kidney stones much more often than other kids. The test didn't look okay twice, but was okay the third time. An ultrasound of his kidneys looked fine. What a relief.

We participated in an interesting workshop: Saito, a japanese massage technique for special needs kids. It's all about loosening up the muscles by shaking them so the kids feel more relaxed. If they feel relaxed they are more alert and more capable to learn. And if you loosen up the muscles around the spine it's good for the development of your brain, they say. We're not sure if Kalle really liked it, but we will try Saito for a while. It's supposed to be fun, not a strict routine. We'll see.

We let Kalle drink out of a cup at least once a day now, just to practice. His record: 100 cc! Not bad :-) He still gets five bottles a day, but within the next couple of months we want him to use the cup instead of the bottle. He will loose his sucking reflex at a certain moment. So we have to practice drinking from a cup now if want to avoid a feeding tube.

The pediatrician wants to check Kalle's groth hormone level cause he is way too small for his age. They tried the test half a year ago. It didn't work cause it's extremely difficult to draw blood from Kalle's very hard-to-hit veins or even his fingers. This time the test didn't work out because they couldn't check his blood pressure (difficult if you have a little more fat around your arms). So we still don't know if he has enough growth hormones. It's important to know cause it influences the way the bones grow. Not enough hormones might result in serious problems, not only in a smaller Kalle... Today they took a photo of his left hand, in order to check the bone age. This might be another method to see if something is wrong. Or Kalle would have to spend a day at the intensive care unit where he would get an arterial line to draw blood and check the blood pressure at the same time. The doctors are still thinking about the next step. 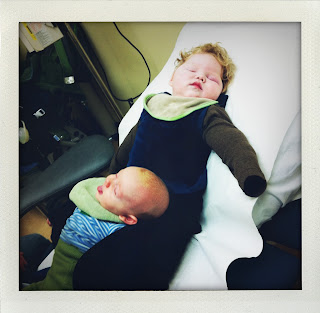 No, we are not getting used to all those doctors appointments, the daily worries, the unsecurity, the sadness. We are happy if we see just a glimps of Kalle, between those stupid seizures. He still loves to drink his bottle, he stretches his arm and lifts it if it takes too long to move the bottle to his mouth. He recognizes it, he makes sure we understand that. Beautiful. We hope to see ore of him in the future, but we are not sure if this is just wishful thinking or if it will become reality.
Gepost door Kalle Elvis Markowski op 22:41 2 reacties