It was a nice idea: Spending four nights in a vacation home near Cologne. We left on wednesday, after hesitating and discussing if we should leave at all. Why? Kalle didn't feel like waking up that morning. You might think 'great, so he slept really well!'. But he needs his medication early in the morning. So we tried to wake him up for an hour or even an hour and a half....nothing. We tried cold wet facecloths, we tried tickling, we tried rubbing his arms and legs, shouting at him....nothing. Just before I became really hysterical he slowly started to open his eyes. He drank a bit and fell asleep again. Then he woke up, drank a bit and fell asleep again.
After calling Kalle's neurologist we decided to start our vacation, in spite of Kalle's weird behaviour. The doctor said that Kalle might just be recovering from his cold. And, he said, if there was something serious going on Kalle probably wouldn't be awake and drinking between his naps. It felt wrong to drive to Germany with a child that wasn't okay. But staying at home didn't feel like the best option either.
The vacation home was okay, not amazing, but okay. It just wasn't our home, not our stuff, our couch, our pillows, our porch. If something serious would happen the next big hospital would be a 30-40 minute drive away.

The next day Kalle had many, many seizures. It was good to see him more awake (I was afraid he wouldn't wake up in the morning at all...). But his epilepsy was bad, really bad. He cried a lot, didn't feel comfortable at all. We figured that this is not a vacation and that we should go home. So that's what we did. On friday - after having lunch with my brother ('uncle Matti') - we drove back to Rotterdam.

It feels good to be back home. But Kalle's epilepsy is still bad. It's almost like there's something epileptic going on all the time. Clonic seizures, weird eye movements etc.... there's almost no comfortable moment. Instead there's a lot of heart breaking crying. Something we noticed every day now during the last couple of weeks. At least once a day, sometimes 3 or four times a day for 30 minutes up to two hours.
I can't describe what it's like to see your child uncomfortable almost all the time. What it feels like if you realize that love ain't enough and that there's probably no cure for this. Doctors aren't magicians.

The EEG on monday probably comes at the right time. Kalle is not okay. His EEG will be far from okay, no doubt about that (no, this has nothing to do with pessimism). We're curious about the epileptologist's opinion. What possible treatment will he recommend? A new drug? I'm afraid of what will come. Either way.
Gepost door Kalle Elvis Markowski op 20:08 1 reacties

Got a phone call today from the epilepsy center... there has been a cancellation and now Kalle can have his 24 hour EEG on monday. Aahhh! So we have to be in Heeze (near Eindhoven) on monday morning, 8:30. One of us will be with Kalle all the time, until the next morning.
It scares the hell out of us. Kalle had some really weird days. Now we're afraid that his EEG will be really, really bad, worse than the last one. Do we really want to know?? And what about the consequences? We don't want more drugs, more side effects. But on the other hand...we don't want more seizures either.
Gepost door Kalle Elvis Markowski op 17:07 1 reacties

Kalle's cold is almost over. He's still coughing every now and then, but his lungs sound much cleaner than two weeks ago.
His epilepsy is as unpredicatable as it always is. Not much news. There are good days and there are bad days.The long EEG will take place at the end of may / first days of june. It's going to be 24 hours instead of 48 because we would have to wait even longer for a 48 hour EEG. We still don't know what the consequences of this EEG will be. Do we want a new antiepileptic drug for Kalle? What will the side effects be? We are still weaning off the sodium valproate ('Depakine'). Will this proces be finished by the time we will have to decide about a new drug? It just feels wrong to give him three differents drugs at the same time. I mean...it's not like he's taking paracetamol suppositories... 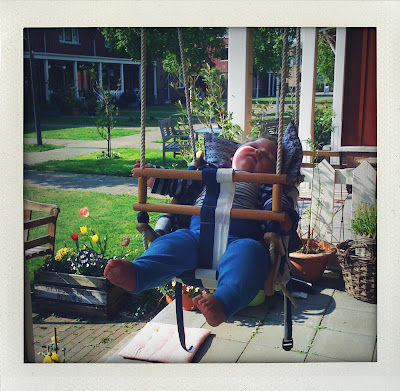 We try to be outside, enjoying spring, as much as possible. Our little front porch is the place to be. Kalle got a nice swing for his first birthday in december. We think he's enjoying it!
Gepost door Kalle Elvis Markowski op 23:27 0 reacties

Sneezing and coughing, that's what we hear all day now. Kalle has a cold. A real one. It irritates him like it would irritate any other kid. But unfortunately - if he has a bad day - coughing triggers his seizures. It's almost like with every cough his head gets mixed up. We have to check his temperature, just to be sure there's no pneumonia trying to sneak up on him. His lower muscle tension makes it more difficult for him to cough properly. Hopefully he'll be better very soon.

Last week we went to see Kalle's osteopath (forgot to about it in the last post). After the treatment we had a completely different child: very alert, calm, relaxed, almost no seizures. It was weird to see Kalle in a way we have never seen him before. Weird because we realized that somewhere inside of him there's a child that actually can have a good time. But this child gets held down by this ugly monster called epilepsy. Unfortunately Kalle's good vibe only lasted one day. This afternoon we had another appointment. It would be great if the positive effect would last a bit longer this time.
Gepost door Kalle Elvis Markowski op 18:28 0 reacties

Went to the Epilepsy Center today. We have no regrets. It was a pleasant visit (as far as a visit to an epilepsy center can be pleasant). No hospital ambience at all, a quiet, clean building in the woods, with furniture in soothing green, blue and brown, nice staff.
The doctor was very 'undoctorish'. Professional, but without the usual distance. He agreed that a longer EEG (48 hours) with video monitoring would be useful to understand if what we see on the outside is or isn't epilepsy on the inside. We know that Kalle's EEG's are bad, so we don't expect miracles. But we just want to get a better picture of the seizures, in order to make better decisions in the future. Another thing is: Most of the times we - the parents - tell the doctors what we see when Kalle is at home. And yes, there are short EEG's that tell us that Kalle's epilepsy is bad. But it feels like a huge responsibility that some decisions are made based on what we see and on what we tell the doctors. A longer EEG might lift some of that weight off our shoulders.
We are now waiting for the EEG appointment (anywhere between now and a couple of weeks).

After a really, really good monday and a very, very bad tuesday yesterday and today were okay. A couple of seizures, but not as much as on tuesday. Kalle had a good night and was pretty relaxed during the day. Now he's sitting on Jan's lap, without diaper and pants (fresh air is good for everyone and everything)... he already peed three times while he is drinking his bottle :-)
Gepost door Kalle Elvis Markowski op 19:53 1 reacties 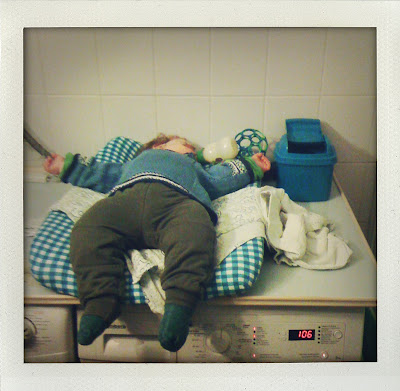 Oh, and Jan doesn't mind to clean one of his guitars in the bathroom, babysitting :-)
Gepost door Kalle Elvis Markowski op 14:15 3 reacties

Okay, telling how good yesterday has been was clearly a mistake. What we feared actually happened: today sucked. The moment Kalle woke up I just knew he would have a bad day. And he did. During the first hour he was awake we already noticed more seizures than yesterday during the whole day. And while noises didn't seem to bother Kalle yesterday, today every little sound was a trigger for the next seizure.

Tonight we were supposed to perform for the first time since...what...october or november 2009? We rehearsed a couple of times with our dear friend Esther van Es. Nice songs, sounded great together. We had to perform in a little restaurant in Schipluiden, near Delft. Jan's mom came over to take care of Kalle at Esther's place, close to the restaurant. So if anything would happen Jan or I could check what's going on. We knew there was a little chance that Jan and Esther would have to perform without me, in case Kalle wouldn't be okay.
Half an hour before the gig  - while we were already in Schipluiden - I decided to return home with Kalle. He wouldn't stop crying, had lots of seizures, couldn't handle any unexpected noises. It was just too much. So what was supposed to be a nice evening turned into a big disappointment. Kalle can't help it, we can't help it. It just sucks.
Jan and Esther performed without me, Jan's mom drove Kalle and me home. Kalle calmed down in the car and slept a while. So I guess I took the right decision. I just wish it wouldn't have been necessary.
Gepost door Kalle Elvis Markowski op 22:36 0 reacties

I have to be careful. Saying something positive often means that something negative will happen the next day. So I'm just a little glad that we actually had a pretty good day today! Kalle had a good night, woke up late, was relaxed. He only had a few seizures and he was very alert.

Yesterday the neurologist finally called. Last monday I had written an email, saying that Kalle is not doing okay, that he's having more and more unacceptable seizures. The doctor agreed that three antiepileptic drugs at the same time is not a such good idea. Those drugs tend to interact with eachother, but you never really know how. He wants to keep on weaning off the Depakine (sodium valproate) and replace it with another drug (probably while we're still weaning off the Depakine). But only a few are tolerated while being on the ketogenic diet. So we'll have to choose between Lamictal and Tegretol. Again, it's choosing between two options we hate. Nothing feels good. Giving any medication to a 1 year old child feels so unnatural, so wrong. And yet, we know we don't really have a choice. Well, actually we do, but the consequence might be that Kalle would have more and more seizures.
The chance that the next medication will work properly is less than 50%, the doctor said. With every new drug we try the chance that it works gets smaller and smaller. Unfortunately lots of kids with Kalle's type of epilepsy are drug resistant. But sometimes there is that lucky shot, one drug that actually does work. It's too early to stop trying. So we'll have to consider the options carefully.
Kalle just had a few good days. So we have time to think about the next step. Maybe, maybe it won't be nessessary after all...

I just added a new feature to this blog. You can enter your email adres on the left side of this page. You'll get an email saying you have to confirm your subscription. If you do, you will get an email every time there's a new post.
Gepost door Kalle Elvis Markowski op 01:19 0 reacties