Kalle at the petting zoo

Went to a petting zoo yesterday. Lots of goats, interested in Kalle, his bottle and his new stroller...

Still some coughing here, still some phlegm, but it seems to be slightly better than it was a week ago. We let Kalle inhale salt water 3 - 4 times / day which helps to loosen up the phlegm.
Drinking is still a problem. Somehow the coordination between sucking, swallowing and breathing seems to be more difficult for him right now. We still hope it's temporary, caused by the virus the discovered, last time we went to the hospital. 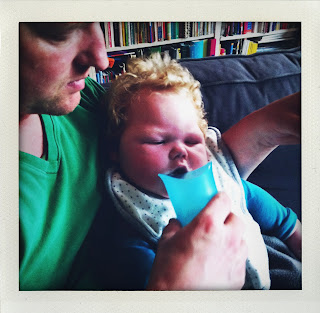 But Kalle is getting older and we thought this might be a good time to try something else: a cup! Cause with a cup he doesn't need to suck. It's going better than we expected. He doesn't enjoy it, but he is bravely undergoing the new drinking experience... It would be great if he wouldn't need the bottle at all in a couple of weeks or months. We'll see...

All of a sudden Kalle is getting teeth everywhere. He started with one front tooth (upper jaw), followed by two (!) molars (lower and upper jaw). Now the other front tooth in his upper jaw is definately present PLUS one front tooth in Kalle's lower jaw.That's five teeth within 5-6 weeks. That might explain some of the crying....


Kalle finally got his new stroller. Today a friend of Jan (who is studying for occupational therapist) helped us to adjust all parts of the stroller so every part fits Kalle's body perfectly. When it stops raining we'll take a nice walk!
The stroller came with two adapters for a baby car seat so we can talk walks with two kids shortly :-) 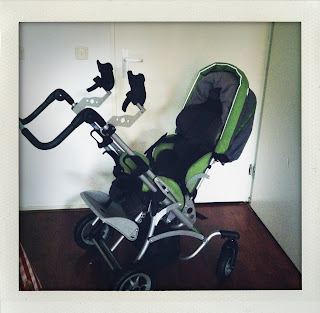 What a relief. Kalle had a better night... and so did we. No more barking, just woke up early and coughed a bit. 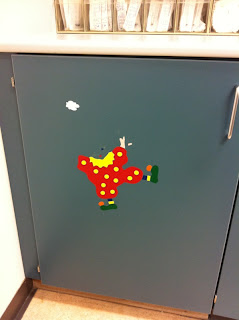 Still try to understand why this clown in the emergency room doesn't have a head. If I were a sick child and I would see a clown like this I'd freak out....

(rectification: In the last post I wrote Kalle had rotavirus 5 weeks ago. But it was RS-virus....something completly different.)
Gepost door Kalle Elvis Markowski op 08:18 1 reacties

Another visit to the emergency room

Five weks ago Kalle had to stay in the hospital for two days. Lots of phlegm, most probably caused by RS-virus. After two days the doctors were sure enough that Kalle would be better instead of worse and we were allowed to go home.
Since then the phlegm is a growing problem. It just stays in the upper part of his trachea. Sometimes it goes a bit deeper, causing irritation. Kalle can cough really well, but he just doesn't cough enough. So we try to force him, but most of the time with no succes. He just coughes when he feels like it.

Yesterday, after a pretty good day, Kalle started to cough in the evening. But he actually sounded like a seal with a sore throat. It must have hurt cause he started crying, which caused more phlegm, which he tried to cough up, which must have hurt more etc.... We let him inhale NaCl (to loosen up the phlegm) and Atrovent (to widen his airways). But he woke up at night, sounding and coughing even worse. His lungs actually sounded terrible. At 4 'o clock we called the hospital. But since Kalle didn't have a fever and he still had the desire to drink they suggested we might as well wait until the morning. So we tried to sleep.

At 7:30 we drove to the emergency room, the only place where they can check all the things that needed to be checked, without an appointment . Kalle's coughing still sounded terrible, but he hadn't developed a fever, his lungs didn't sound worse. They immediately suggested Kalle may have a condition called pseudo-croup. Treatment: inhale once with a stronger medicine (pulmicort), inhale more often at home with NaCl / Atrovent and be patient. They made an x-ray of his lungs which was okay (they saw some phlegm - what a surprise - but no sign of inflammation that might lead to pneumonia). After 4 hours we went home. Now we hope that the next night will be better.

At the emergency room, when Kalle was crying, I made a very surprising discovery. I saw two (!) teeth I hadn't seen before. Not just small front teeth, but two molars at the right side of Kalle's jaw, one in the upper jaw, one in the lower jaw. It's pretty weird 'cause Kalle still doesn't have all of his front teeth, only one in the upper jaw. But I guess Kalle wouldn't be Kalle if everything would be just normal....
Gepost door Kalle Elvis Markowski op 22:08 0 reacties

Kalle's last week was just another up-and-down-week. Bad days with lots of crying and more seizures, good days with less seizures, more alertness, more contact. His 2nd tooth is almost there. Drinking is kind of a problem right now 'cause after every bottle Kalle it sounds like part of the nutricion stayed in the upper part of his trachea. He can cough really well, but he just doesn't cough enough. We try to force him, but he has got his own ideas about it.... So let's hope this is just a temporary problem. He loves his bottles. Taking them away from him and giving 100% of his food through a feeding tube really isn't an option. 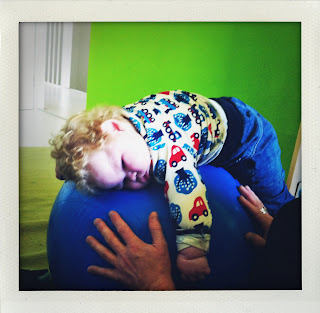 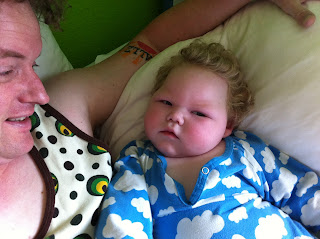 Kalle's first tooth came through two weeks ago and the second one is already peeking through :-) Most kids get their first teeth much earlier. We thought that Kalle's brain damage might be the reason for the delay. Other parents of kids with epilepsy told us that AED's (antiepileptic drugs) harden the gums and make it much more difficult for the teeth to break through. Especially sodium valproate seems to have a big influence on the teeth. That's exactly the drug we are weaning off since last march. So maybe that's the reason why Kalle's teeth now start to grow.

Kalle also got his first haircut ever. I'll post a picture later. We saved one curl (still his first baby hair!).

Kalle is still coughing a lot and has lots of phlegm, especially after drinking his bottle. The ketocal contains so much more fat than regular nutrition...so that doesn't help. The epilepsy is going up and down, as it always is. Bad days, better days. The teeth coming through don't help. Kalle's neurologist wanted to introduce a new AED, but we convinced him to wait, at least until we weaned off the sodium valproate. We don't want Kalle to take three different AED's at the same time.

Last friday we went to the hospital for a regular blood and urine check. That's what the ketogenic diet protocol requires every three months. Early in the morning we attached a urine collection bag to his genital area (which looks kind of funny...poor penis...). But hours later the bag was still empty. We waited. And waited... Nothing happened. So they only did the blood work and gave us two urine collection bags, for the next time :-)
Gepost door Kalle Elvis Markowski op 07:38 1 reacties