May 2010 Kalle's EEG revealed epilepsy for the first time. By that time we hadn't seen any seizures yet, but apparently the epilepsy was 'in his head' already. Kalle immediately got his first AED's (antiepileptic drugs). And how crazy it may sound, his first seizures started. The meds didn't work properly.
First we saw unvoluntary muscle jerks of one arm every now and then. Weeks later we noticed Kalle's first 'head turn': During that type of seizure he turns his head from the left to the right, his hands open and / or his arms move upwards. At the end of a head turn he sometimes smiles and even makes silly laughing sounds.
The head turns and the muscle jerks got stronger since last summer. In february Kalle had one of his first real clonic seizures that usually last 10 - 40 seconds: one or two muscle jerks a second. Arms, head, eyes, eyebrows, panic in his eyes. Sometimes he makes sounds, like he is really scared. His legs feel tensed, his feet are turned inwards. Those seizures look and feel pretty scary. If they would last too long (minutes) we would have to give Kalle emergency medication to stop it.

Kalle never smiled a lot. In the beginning he was too sick. Than he was recovering, unhappy. Just before the real seizures started there were a couple of weeks he smiled a couple of times. He even laughed when I tickled him. That happened maybe 5 or 6 times. What a blessing. The smiling and laughing stopped when the seizures started. That happens a lot when a baby gets West Syndrome, the type of epilepsy Kalle developped.

Sometimes people see one of Kalle's 'head-turn-seizures' and they think he is really smiling. I must admit, he looks cute when it happens. We know it is epilepsy, but at least it doesn't look as scary as his clonic seizures.
Today I thought: If the clonic seizures with the panic in his eyes make us sad and scare us, why shouldn't we be glad to see Kalle smile during a head turn, even if it's epileptic? Remembering how he looks if he smiles or laughs can help us to look forward and give us some hope that maybe one day Kalle will really smile and laugh again. Because that's what a happy kid is supposed to do. 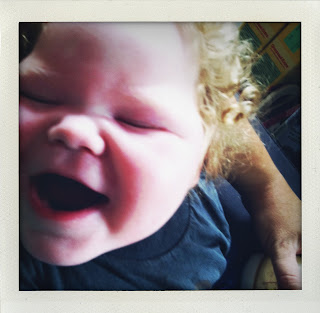 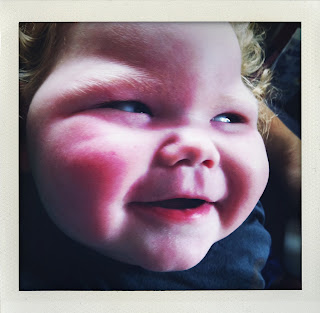 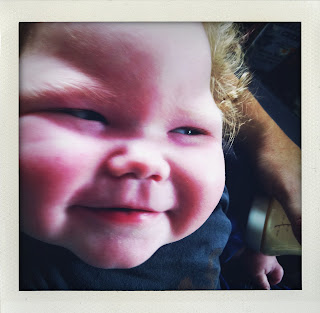 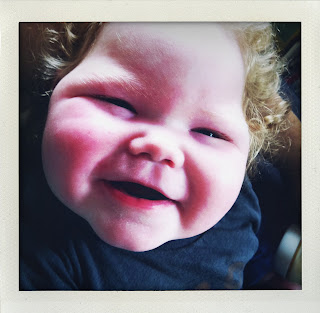 Quick visit to the emergency room

Yesterday - after two days at home - we rushed to the hospital again. (Just to reveal the good ending: we didn't have to stay.)
Kalle was coughing so badly he started to cry. The crying caused more coughing, more phlegm. Breathing between the coughs became more and more difficult, he started to make terrible sounds while he was trying to suck in some air, his lips turned blue-ish...and we called 112 (Europe's 911). It looked like Kalle might choke every second and just stop breathing.
When the ambulance came they checked Kalle's oxygen level, which was surprisingly good, they sucked away some of the phlegm, drove him and me to the hospital. Kalle calmed down a bit, the doctors checked his lungs (sounded okay, just a lot of phlegm) and we were asked to decide whether we wanted to take him home or not.
So after a couple of hours we drove back home. Advice: If something like this happens again the only thing we can do is let Kalle inhale some of the med he is using anyway when he has a cold.
Let's just hope this incident was just a stupid coincidence and it will NOT happen again. It was pretty scary.
Gepost door Kalle Elvis Markowski op 09:55 0 reacties

After two nights we're back home, with Kalle....relieved that we didn't have to stay two weeks, like the last time. The doctors just wanted to be sure Kalle is recovering instead of getting worse. And apparently he is! He is not feeling totally fine yet, still coughing and sneezing. But at least he really wants to drink, he's more awake and his lungs sound better. 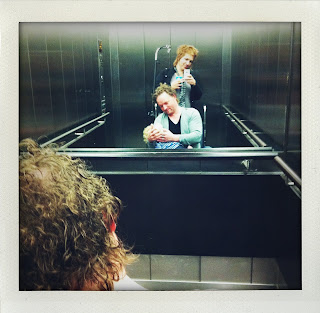 They also checked his tonsils. Slightly bigger than normal, but not big enough to operate. When we took him to the ear-nose-throat specialist Jan thought it would be easier to use a wheelchair instead of carrying Kalle aaalllllll the way to the other part of the hospital (2 minute walk...). Just for the record: Jan is doing fine.
Gepost door Kalle Elvis Markowski op 15:19 0 reacties

Looks like Kalle has some difficulties recovering from his nasty cold. Too much phlegm, not enough energy to drink all his bottles. But the reason we went to the hospital today was a very low temperature: only 35 degrees Celcius. We hoped they would only check his blood for bacterial infections (which they did...everything looked fine...so it's a virus). But like in january, the oxygen level is just too low. 100 is perfect, 96 is perfectly fine, but Kalle had 92, 93... His lungs sound okay though. Just a lot of phlegm that needs to come out.
So they gave him some oxygen and they want to keep him in the hospital for at least one night. That's the same thing they told us in january. We stayed two weeks... Let's hope Kalle feels better tomorrow and we can go home together. Jan is staying with Kalle tonight, I'm sleeping in my own bed (which feels terrible).
The crazy things is: There was almost no epileptic activity during the last days.

The whole family is sneezing and coughing. Including Kalle. He even had a higher temperature. That always makes us nervous 'cause a higher temperature often means more seizures. Welll....he had so many of them today that counting was not an option. Another thing that doesn't help to make him feel comfortable: Kalle is finally getting his first tooth! It's not there yet, but there are two white spots and some swollen gum in his upper (!) jaw. Yay!!! I bet he'll look even more cute with teeth :-)
Gepost door Kalle Elvis Markowski op 22:29 1 reacties