Nothing really changed since yesterday. Still tons of phlegm, still a lot of coughing, still a feeding tube and still a nasal cannula for just a bit of oxygen.

Being in a hospital for more than just one or two days makes the time stop. The whole world keeps on turning while you're sitting a small room with a certain smell, old furniture, medical stuff everywhere. You move from the couch to the table, from the hospital bed to the bathroom to the room with the microwave. 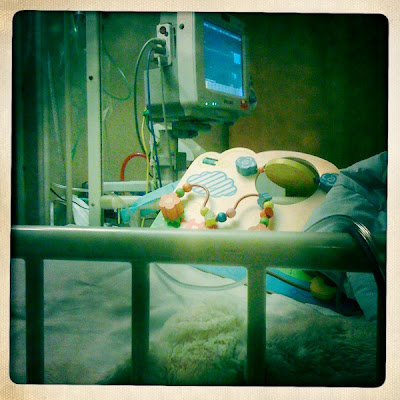 At the end of the day you wonder what you actually did that day, what happened. You wonder if it really helps to sit in this weird bubble, waiting for cure, or at least improvement. You don't know when you are allowed to go home, not alone, not just for the next attempt to sleep. But together, for a long time, back to a life that is at least a little bit more real.
Gepost door Kalle Elvis Markowski op 23:25 0 reacties

After a night and a whole day without any oxygen Kalle's saturation was too low last night. Not very, very low. But just too low. So now he has a nasal feeding tube in his left nostril and a nasal cannula in both nostrils. At least his face looks symmetric now, with two patches.... 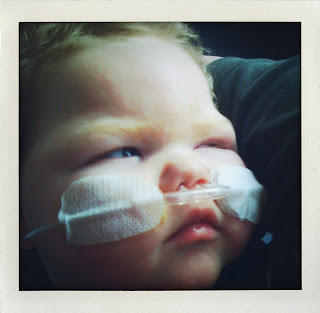 There is still a lot of phlegm in his airways. Even though he coughes every now and then it just seems to stay there. Yesterday I called the laboratory for the results of the viral tests. It turned out he has two virusses: Rhino and Picorna, two common viruses that cause a common cold. But because this is Kalle's first winter, he still needs to develop his immune system. And it's more difficult for him to get rid of the phlegm beacuse he doesn't move as much as other kids. Right now he is two meters away from me and I can hear that weird squeaking sound while he's breathing. So going home together seems to be far away...it will be days, maybe a week?

The people in the hospital are nice. But everything is old, worn out. The hospital will move to a new location in a couple of months. We're on the ground floor, a parking lot in front of our window. So at least ther's a lot of entertainment.
Gepost door Kalle Elvis Markowski op 11:26 2 reacties 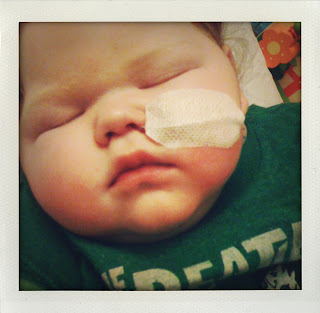 It was a huge step, but we should give it a chance. Let's hope he has a good night and already feels better in the morning.
Gepost door Kalle Elvis Markowski op 00:05 0 reacties

The last couple of weeks Kalle is coughing a lot, with tons of phlegm in his bronchial tubes. Every time he takes a breath you can hear strange noises. This morning those noises just were too present. Unfortunately we can't just call his pediatrician and ask if she can listen to his lungs (we want to be sure he doesn't have pneumonia). It's a big, academic hospital, meaning: if you want an appointment today, you need to go to the emergency room. So that's where we went.

They took a photo of his lungs. The photo showed signs of a viral infection, just like a couple of weeks ago. But no pneumonia. And it turned out that Kalle is not getting enough oxygen, because of all the phlegm that is blocking his respiratory tract. His saturation (= oxygen level in his blood) is supposed to be between '92-100'. It was around '89-92'. That's not really bad, but it's just not okay. So they decided to keep him for a day or two, to keep a close eye on him, give him an extra med, maybe even an antibiotic (which I don't really understand because it's not a bacterial, but a viral infection...). Unfortunately the hospital where at least some of the doctors know Kalle didn't have a bed available. So now we're in a smaller hospital, further away from our home. His saturation is already slightly better than a couple of hours ago. So maybe, maybe we can go home tomorrow. Cause home is where we should be. Where we want to be. 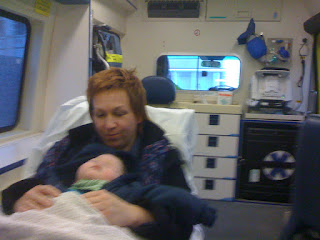 Me and Kalle in the ambulance...he slept. I thought this was the cool part of the day....
Gepost door Kalle Elvis Markowski op 19:25 0 reacties 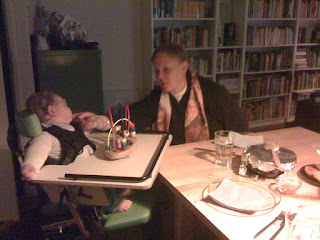 Yesterday we finally got Kalle's special chair. After 3,5 months of waiting. It is huge, but fits well. And it's green (we were allowed to choose the colors). So yesterday Kalle was joining us at the table for the first time while we were having dinner :-) Pretty cool. 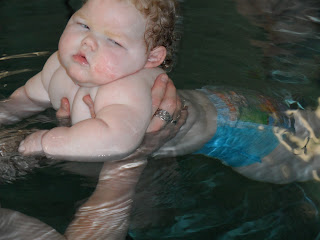 Another 'first time': We went swimming, with Kalle. At the rehabilitation center they have a warm pool. Well actually...Jan went swimming with him, I watched, took pictures and made a short video. We're not sure he really liked it, but he didn't cry, so maybe he just had to get used to the new envorinment. And of course he looked extremely cute in his swimming diaper....
Gepost door Kalle Elvis Markowski op 12:53 2 reacties

Birthday at the kindergarden

Kalle celebrated his first birthday at the kindergarden today. Although his birthday actually was on dec 28 it was a real celebration, with gifts, a birthday song and a birthday hat. Not so sure how much Kalle enjoyed it :-) ......... 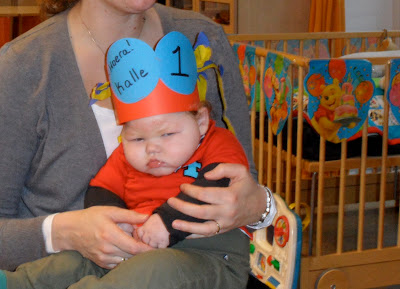 We went to the hospital today for a hearing test. Lots of kids who had meningitis loose their hearing or at least have difficulties to hear. This last of three tests after the meningitis treatment was as good as the first two. Kalle's right ear is good. His left ear is not as good as the right one, but it's still okay. That's pretty amazing, considering the damage in his head.
The waiting room was full of people. Nervous parents, children running, playing, shouting. Then we heard the hearing test-lady call Kalle's name. With Kalle in my arms I walked to the other side of the waiting room, totally filled with love and pride. That feeling just hit me when the lady called Kalle's name. I thought: 'Yes people. This is our amazing son, with the most lovely face, gorgeous curly hair and a pretty cool name. Take a good look.'
Gepost door Kalle Elvis Markowski op 00:36 2 reacties

...to post bad posts. Like the last one. Last nights where actually okay, with only 1-3 short breaks. Yesterday Kalle and I played the kicking-game for quite a while: Kalle is laying on his back, kicking with his feet, trying to hit something....in this case me. He seems to enjoy every 'succesful' kick. At least...that's what we think. We notice some enthousiasm in his face. It's great that he moves his legs like this. Shortly after his meningitis they ran a test to check if there were signals going from his hands and feet to his brain. The results were bad. The test is not 100% reliable, they said. And it shows. Kalle is definitely consciously moving his arms and legs, trying to hit something, reacting. Go Kalle!

Kalle had one of these nights....a night you can't even call a night because sleeping was not one the options. We have no idea what's going on (and frankly... it's difficult to think straight when sleep deprivation is mixing up everything). Instead of sleeping last night Kalle slept during the day. So what will next night bring....
We tried to go out for a walk, but Kalle started to cry so terribly that we had to go back home.
Bad night, weird day. Not exacty a day to remember. Hopefully the next days will bring better news.
Gepost door Kalle Elvis Markowski op 21:39 0 reacties

It's difficult to understand what is going in Kalle's body. We try to 'read' him as good as we can, based on everything that happened during the last year. But sometimes we just don't know. Why did he have a good night yesterday? Why didn't he the night before? Why was his epilepsy 'okay' today and terrible a couple of days ago?
The doctor said that small things can have a big influence on the epilepsy, like obstipation or a virus you can't see 'cause it's not causing a fever. There are no big changes in his medication, so we can just guess. It often remains a mystery. We learned to accept that we don't have all the answers, and neither do the doctors. Sometimes it feels like a guessing game.
We can't see what is going on in Kalle's head. And if we could we would probably realize even more that there isn't a cure for every bad thing that is happening to him. And that not every bad sign we see on the outside means automatically that there is something serious going on. So what we try to do is say 'he just has a bad day'. We try to find a normal answer for an irrugelar question. And then we hope that the next day will be better. And that's what happens every now and then. Bad day - good day. Maybe he uses the bad days to grow, apparently that's what happens with healthy kids, too. Growing pain. Just a regular thing.