The 20 minute car ride yesterday from the medical daycare center to our home was the worst of all rides ever. 'I hope he'll be more relaxed at home than he was here with us', the nurse said. Unfortunately that didn't happen. Kalle was epileptic almost the whole 20 minutes, with short breaks. He was crying, with panic in his eyes, almost choking in his tears. I tried to drive with my left hand on the steering wheel, my right hand on Kalle's leg, almost crying as hysterically as my son. I decided to drive as fast as I could (and as fast as all the red traffic lights let me), instead of stopping and trying to sooth him. It was a nightmare and I hope this will never happen again.
Maybe a day at the daycare center just was too much for him. Too many noises, too much going on, not enough rest. Maybe yesterday was a day Kalle needed rest, a relaxed atmosphere. And maybe I should have listened to my gut feeling in the morning, telling me Kalle should stay at home.
He needed some time to calm down. The evening was okay-ish, even though I still saw lots of small series of muscle jerks. The night was much too short.
Very curious what the EEG on monday will tell us.

Up and down again

During the last couple of days we saw a LOT of epileptic activity. At least we think it is epileptic activity. Shaking arms, weird eye movements, everything at once. Panic in his eyes, sometimes crying. Those 'seizures' only last 10-20 seconds, but sometimes they occur so many times during a short period of time that it feels a lot longer. Why aren't we sure if it's a 'real' seizure every time? Because sometimes it looks like an immediate reaction to a sound, a movement, a change of temperature (Kalle had 3 or 4 of those weird panic attacks during a 10 minute walk outside....it was almost freezing).

Because Kalle still has a nasal feeding tube he gets much more nutrition than he did without the tube. He now (almost) gets his perfect intake every day, according to the dietitians.The downside: his body can't control the amount he needs because we force him to take all the nutrition. If he would only get his bottle he would be the one to tell us when he has enough. I mean, we don't eat the exact same amount of food every day. Our body tells us what he needs. That's why this feeding tube is so unnatural. And why it also might be a problem: Too much food might cause obstipation. Obstipation might cause more seizures.

Next EEG will be on monday. We're extremely curious...hopefully it will help to understand what is and what isn't a real seizure.

In spite of all this trouble Kalle also surprises us. Sometimes he's so awake, he 'plays' with his favorite toy, he looks at us and touches our face. But it's hard to be happy if there's so much trouble going on. Let's hope it's just another phase Kalle has to go through. New or more medication just doesn't feel like an option right now.

The 3 months trial period of the ketogenic diet is almost over. Monday EEG, tuesday big talk with the dietitians and the neurologist. Everybody had been positive about continuing the diet, so far. But after the last week(s)...

I also read an article about the possible negative effects of one of Kalle's drugs on the diet (you can dowload the pdf here: site.matthewsfriends.org/uploads/pdf/DrugInteractions.pdf%20). It's not a medical study. It's something the folks of Matthew's Friends (huge homepage about the diet) noticed with lots of patients. So this might be something to think about.
Gepost door Kalle Elvis Markowski op 10:11 0 reacties

Just talked to Kalle's neurologist. Kalle's last EEG is much better than the last one. It's far from 'good' (it will be never be good or normal), but for Kalle it's a step in the good direction.
It's weird because I noticed a lot of epileptic activity during the EEG. But apparantly not all of this activity appears on the EEG. So IS it epileptic activity or something else??

Of course, we're happy with the rresults. But we're also aware of the fact that the EEG is just a snapshot in time. It might have been a lucky moment. But maybe it is in fact the result of the ketogenic diet. Maybe it really helps.
Next EEG on february 28. We'll see... 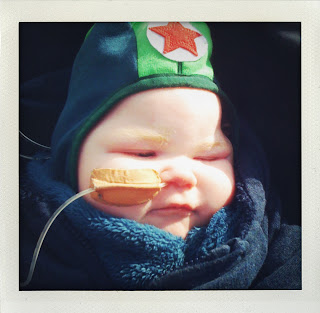 The results of the metabolic tests are good. Great!

So much has happened during the last year. So many unexpected things. Almost all of them were negative. Because of that we're cautious about being 'too' happy after one 'good' result.
So we'll wait for the next EEG and hope that it was more than a snapshot in time.
Gepost door Kalle Elvis Markowski op 18:05 1 reacties

Got home from the hospital on tuesday. Since then Kalle shows a lot of epileptic activity. A late reaction to his viral infection? We don't know. But it's scary. He cries a lot. Sometimes he wakes up, his arms shaking, with anxiety in his eyes, crying. That might be epilepsy, too. It would be the first expession of this terrible disease that obviously really bothers him.
Kalle's neurologist is not working this weekend, so I guess we have to be patient, wait until monday and see if it's still as bad as it has been the last three days.
Gepost door Kalle Elvis Markowski op 01:58 2 reacties

Finally. We're back home...WITH Kalle. After almost two weeks the doctors didn't want to deal with us anymore :-) Kalle is still a bit sick, but not sick enough to be in the hospital. Still some diarrhea, some vomiting, but his oxygen level was okay now, his lungs sounded much cleaner. We're exhausted and it feels weird to be back together. No nurses, no machines, no bleeps. Almost scary.
The first thing I did was collecting cat poop in our garden. Welcome home.
Gepost door Kalle Elvis Markowski op 19:54 3 reacties 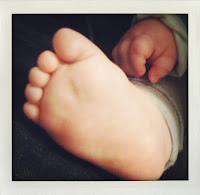 It's part of the rotavirus infection, but it's still nasty: Kalle threw up again this morning. 45 minutes after he took his meds. The nurse gave him his nurtrition pretty early...without any problem. So I guess Kalle just doesn't like his meds. Maybe he read about the side effects...
The doctors say that if you throw up after more than 30 minutes you don't give the meds again because the body should have absorbed the important ingredients. Let's hope they're right.

At least he's in the mood to play a little bit with the 'activity center' he got from auntie Esther and uncle Rogier :-) 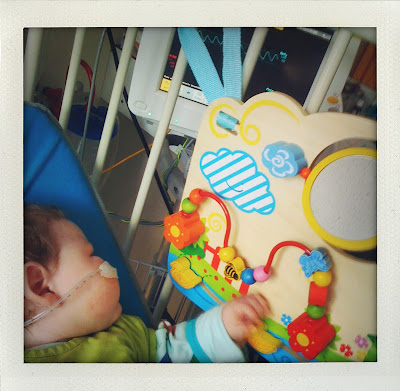 You might think that if you go to the hospital you're supposed to get better.... well...that's not always te case. Kalle has diarrhea and he vomited twice after receiving his medication. Turns out he has the Rotavirus.
Somehow it's almost a relief. We were worried that something might be wrong with his drain. Vomiting and an increase of epileptic activity may be a sign for a drain that is not working properly. But it's 'just' another virus. There is no medication, you just have to be patient. We hope Kalle's stomach will accept his medication in the morning. Especially his antiepileptic drugs are so important. Skipping the meds once isn't great, skipping twice is a real problem.
Hope you'll get better soon, little man!
Gepost door Kalle Elvis Markowski op 21:11 0 reacties

We want to go home!

Still in the hospital. After a day and a night without oxygen Kalle just needed a little bit this morning. His saturation was not good enough without it. It was not way too low, like always...it was just a bit too low.
Lots of epilepsy, lots of small seizures, not very alert either. It almost seemed like Kalle was somewhere else today. We were so worried that the pediatrician decided to call Kalle's neurologist in the other hospital. He said that the epilepsy may react to the viral infection now and that this reaction often occurs when the biggest part of the infection is already over. That was a small relief.
Drinking is still a problem. He gets his nutrition through the nasal feeding tube. When he tries to drink it's okay for a short time. Then he starts choking and coughing. The chocking is not very bad 'cause he coughs very well, but we are afraid that we don't give him the chance to fully recover if he keeps on choking now. So I guess we'll have to take him home with the feeding tube and then see if we can go back to the bottle. Kalle loves it so much.

Kalle had an EEG today. He looked so cute with his electrode cap :-) The major insult at the beginning of the EEG was not so cute. At least they registered it, meaning: They now know what we are talking about when we tell them Kalle had one of his 'head from left to right-seizures'. Result on february 11, the day of our next appointment with the neurologist.


We're not so sure this EEG will be much better than the last one. Of course, we hope the epilepsy got a little bit better with the ketogenic diet. But EEG's are not the holy grail. Maybe it's even more important what you see on the outside: does he make more contact, is he more relaxed, more alert.... On march 1 we will talk about the 3 months trial period (dec / jan / feb). That day we'll decide if Kalle will stay on the diet or not.
Gepost door Kalle Elvis Markowski op 19:14 1 reacties