Day 16 of the ketogenic diet

Great. Just came back from the doctor. Kalle has an infection of both his middle ears. The good news: his lungs are clean. We were afraid he would have pneumonia.
Infections of the middle ear are caused by viruses most of the times, but sometimes it's caused by a bacteria. That's why Kalle needs to take an antibiotic. We are not very pleased...the last time Kalle's digestion went crazy (because antibiotics kill the bacteria in the bowel system, the bad and the good ones). But IF it's a bacteria it might go from bad to worse. Those infections can even cause hearing damage.
At least we now understand why Kalle had two bad nights, acted more restless and showed quite some epileptic activity: After a couple of days of coughing and sneezing he developed an infection of the middle ear. What a bummer.
Diet wise there haven't been any changes. Kalle accepts the Keto Cal, even seems to like it (?!). Because of his cold (now infection) we can't really say if it already changed his seizures or the number of seizures. Being sick spoils everything. His ketones and his blood sugar are good so far, but we have to be careful. Drinking less (which is pretty common when don't feel okay) might influence his ketosis and his blood sugar. 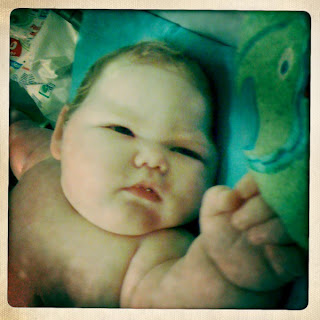